NOTE TO READERS, VISITORS, GUESTS AND THE NEIGHBORHOOD ARTISTS: SNAKE OIL represents the opinion of Kendall F. Person as thepublicblogger. It has no reflection on the ideas, opinions or political views of any artists, rather their work appears on a single post or they are an integral part of The Neighborhood Shows. Nor should it reflect on thepubiclogger.com as a whole, as our all-inclusive forum will never change. But there are hills in which we must be prepared to stand our ground.

Trying to convince someone, that they have been sold a vial of snake oil, is an exercise in futility – like putting the cart before the horse. Try as you may, it will go nowhere at all. The solution – although fraught with energy-zapping challenges, but with ends that justify the means – is to draw their attention away from what is being sold, and directly on the person selling the world’s most dangerous drug.  And there is always an effect, when individuals or communities or countries either fall under the imagined spell of the rubbish inside the vial or allow it to go unchecked, until a collision course becomes imminent. The only unknown is the size and magnitude of the carnage.

“The killer whose name I will not say, was born in Afghan, of Afghan parents, who immigrated to the United States.”  – Donald Trump

Omar Mateen was many things. From a cold blooded murderer to a hate mongerer. But an Afghan he was not, rather a natural born American citizen. But the truth did not matter to Mr. Trump even as a Federal Investigation of our nation’s worse lone shooter massacre was underway. It did not matter to Mr. Trump, that Mateen’s own father had quickly made a statement, about probable cause of his son’s deadly eruption (pissed off after seeing two men kissing). The need to fully understand what happened, in order to prevent another tragedy like this one, did not matter to Mr. Trump. An entire nation had fallen into mourning – and the second statement the Presidential nominee made, was not of compassion and words of comfort, but a self congratulatory tweet – fitting  the very definition of egomaniacal – that he was right about Muslims. If cake requires icing, as it turns out, there is so much more to the story, yet without stopping to pause or take inventory of the moment, he continues peddling his snake oil. 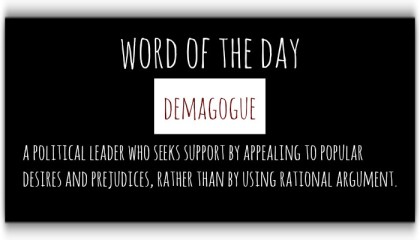 “The big decisions should be made by the people who won an election, whether the court agrees with them or not, as long as the justices don’t have to distort the law to do that.”
– U.S. Supreme Chief Justice John Roberts

Known as a conservative himself, Chief Justice Roberts could have been the rock star of the Republican Party, by overturning the Congressional passage of President Obama’s signature Affordable Healthcare Act. But he understands that country is bigger than any one person, so he thought through the repercussions, making his decision on what was best for his country. He has been my rock star ever since.

In contrast, at Mr. Trump’s conventions when things get out of order, he does not act with the poise and dignity of a leader of a nation whose beauty can be found in the diversity of its people. On the contrary, he revels in the power of the moment. Pitting American against American on an international stage. At a minimum – textbook divide and conquer. But do not allow arrogance to have you believe it only happens in other countries: as civil wars have been started over less.

He lies, he yells he insults with regularity, the same people he vies to lead. His uses a brash-billionaire-television-celebrity persona, to ramble-off “solutions” without offering a strategic plan. He has banned the Washington Post from insider coverage of his campaign – along with several other popular and respected media outlets. In Mr. Trump’s world, the hell with freedom of the press (see North Korea), yet he is running for President.

He is a snake oil salesman. It is snake oil in that vial. And rather we look at Germany or Rwanda or Sudan or North Korea or Salem USA, it has been proven time and again, to be the world’s most dangerous drug. It is up to all of us to speak up, because God help our nation if the demagogue becomes President.

← #8 Ned Hickson Proves 49 is The Sexiest NUMBER of Them All
The Five Reasons Why: We Are Our Brother’s Keeper →