DAY 4, ACT V – MUSIC: ALL THE WAY THROUGH THE GENERATIONS

INTRO
Doubt exist at both ends of the pole: from no effect, to altering the course of our lives. Often confused with indecision or lack of ambition, doubt actually works in our favor, forcing us to rethink, remap, to scan through the details, to imagine perfection. But it also holds a sinister side, forcing a cower in the corner, making us disbelieve we are capable of great things.

YOUNG VOICES, WE ARE LISTENING
Day 4, Act V – Music: All The Way Through the Generations

“It was Motown’s shift from popular music and love songs to music with a message, that helped the city heal.” – Allen Rawls, Motown Museum Trustee, Baby Boomer

Through The Generations
Detroit, 1967

They had not cowered, after all, they were the future generations of a lineage that survived the Middle Passage and outlasted slavery’s brutality. During the height of the Jim Crow Era, they were not running in fear, but the Great Migration, that led to  hundreds of thousands of Black Americans to move from south to north, was a genuine pursuit of the idea of the American dream. But there must have come a moment, when doubt entered their minds, not as an internal struggle, but one with their home nation, that had not yet come to terms. So without real leadership existing to heal a divided city, and address the needs of the Black constituents before poverty and crime and dependency became entrenched, the pot no longer simmered but became combustible, until it finally boiled over².

On July 23, 1967 America’s 4th largest city exploded, into one of the most destructive riots the nation had ever seen. When the smoke cleared, days later, the damage was not simply massive, but everlasting. Forty-three dead, 342 injured, 1400 buildings burned to the ground and a distrust so strong, that thousands of White Detroiters fled, leaving Detroit Michigan for dead.

But through the strength of generations and the erasure of doubt, the sounds of Motown would become the Motor City’s saving grace, and music its new found clout.

At the center of Motown’s push to help humanity heal, in a post-riot climate, they would shift from popular music and love songs to music with a message, like Marvin Gaye’s.  ‘What’s going on?’ His 1971 album ran the gamut of conflicting emotions, starting with the title song that encouraged hope and finishing with “Inner City Blues,” that rhythmically captured Black America’s frustrations.¹

“In my music, I don’t rap about anything I don’t live or I’ve never done.” – Lady Kyd 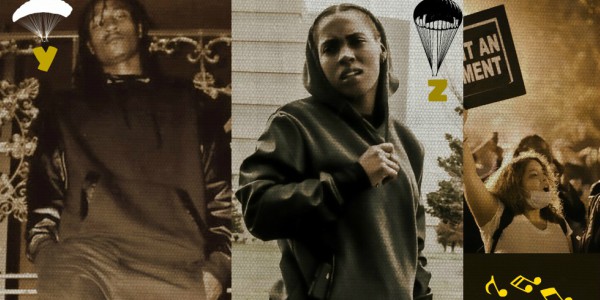 All the way up is the way I go. You better keep up because you’re moving too slow.

Newcomer Lady Kyd and veteran underground recording artist H-y Loco, in All The Way, they have created and delivered a performance, with conviction of sound and words.  It is not just the hypnotizing beat, that surrounds us at jump, or the way their voices blend so fluidly, as Loco flawlessly – about half through – joins the melody, sliding into the beat of Lady Kyd’s song, The less confident would have faltered, for Kyd’s dazzling rapid fire flow, makes it a challenge to keep up. But confidence Loco does not lack, allowing him to be himself, without the need or desire to attempt a takeover.

Both hail from Sacramento, whose recent uprising over the death of an unarmed young Black man, has simmering tensions of its own, represent a generation that understands, that they must be dedicated to pursuing their dreams, while being responsible in their civic duties and honoring their commitment to family, community and friends. In a recent interview, when asked if she believed in an entertainer’s responsibility to make a contribution, while on life’s stage, Kyd responds, “Yes, whether it’s in your calling or just how you are on a daily; There are  people we just randomly pass by and can turn your whole day around.” Lady Kyd understands she is still a work in process, but through her music we can feel the ambition rise through her young voice, offering inspiration for the mind and music for the soul.

Lady Kyd is a relative newcomer, but H-y has long term roots and any day now, he and his wife will welcome their 4th child into a family, that he is so proud of. When asked if he was granted more hours in a day, raising a growing family and working a full time job, yet still finding time to hone his craft, “That request was denied, but for me, raising my family and making music is all part of the same dream.” Loco replied.

All the way is where we predict that both Lady Kyd and H-y Loco are destined go.

In Closing: Words of Wisdom to the Ys & Zs.
Opportunity – sometimes – is delivered on a silver spoon, but even then, we find ways to sabotage our own success and free ourselves of guilt, by blaming it on someone else. But most people who move ahead or achieve their goals or live their dreams out-loud, have their eyes locked in on the prize and they will run, then dive to catch it, before the window of opportunity closes, allowing doubt to settle in as the permanent imposture for hope.

this is… The Neighborhood. Thank you for attending Young Voices, We Are Listening We hope you enjoyed the show.  It has always been, the imaginative genius of music, that closes the generational divide.

¹Detroit Free Press, July ’67 altered the sounds, sensibilities of Detroit musicians — and those yet to be born, Brian McCollum
The Neighborhood, Class and Race, Kendall F. Person