BALTIMORE’S 72 HOUR CEASEFIRE IS A HAIL MARY – BUT WHAT IF IT WORKS.

nominated for The Neighborhood’s 2013 Song of the Year
from Baltimore Maryland, A.U.T.O w/ MOVIE

BALTIMORE’S 72 HOUR CEASEFIRE
IS A HAIL MARY, BUT WHAT IF IT WORKS.
written & edited by Kendall F. Person

In 1921, the Greenwood District in Tulsa Oklahoma was one of the most affluent African American communities in the nation. A sprawling residential neighborhood surrounded a thriving business district so robust, it was referred to as the Black Wall Street. On May 30, all anyone really knows, is that a young black man and a young white woman, were on the same elevator alone. But when word got out, and the story traveled from mouth to mouth, White Tulsa became enraged and only the nigger’s blood could douse the rising inferno. The city paper – The Tulsa Tribune is said to be by those who remember – the institution that fanned the flames. 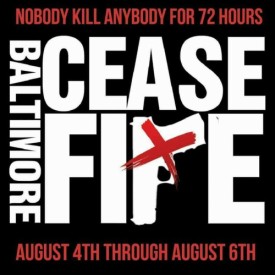 The young black man was arrested, and was in custody when the lynch mob arrived. When the Sheriff turned them away, he had no way of knowing, that by following the law of the land, he saved the life of one young man, but the cost would be great; the white mob would singe, then multiply. Hours later, by land and by air, with guns and fire bombs, once the destruction of Greenwood District in Tulsa was underway, it would not end until Black Wall Street was annihilated.

Baltimore Ceasefire is a bold grassroots movement,  an imaginative solution in walking a different way. The cynic may ridicule and the realist may belittle, but Erricka – one of six community members behind the 72 hour plea, that there be no murders from August 4 thru August 6 – is steadfast and resolute. She understands completely, that there is no magic wand, and that murders can be spontaneous and murderers void of conscious. But without flinching she says, “We have to try something. It has affected our way of life. Seems we are always in tears.”

The late 1980’s and early 1990’s was a boom and bust time for young African American males. College enrollment was on the rise, and the hip hop artists were becoming the industry. Then the crack epidemic and gang violence exploded in Black communities nationwide. The body count was staggering, and Baltimore rivaled Detroit and Los Angeles for which city suffered the most blows. But this time, there would be no white mob, only black on black violence; intense and widespread.  Only a minority of Black American families went unscathed. (In 1989, my youngest brother was shot in the head at point blank range, and died as his blood turned the rain water red, just as our Mother arrived). While many theories existed as to how such a formidable drug could saturate the inner cities, ultimately it did not matter, it was a problem that had to be solved by the community itself. 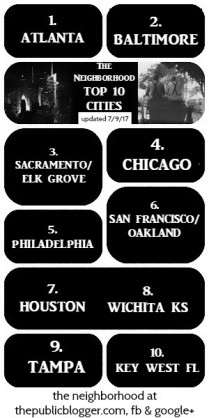 What The Neighborhood finds most sincere about the ceasefire mission, is while Erricka had no shortage of words, she neither wanted credit for taking action, giving it all to the Baltimore residents, and nor – not once – did she blame historic atrocities like Tulsa, nor make comparisons to the 80s gang violence, that nearly crippled Black America.

“It is not about blame it is about starting a dialogue. It is about 72 hours of peace.” Unlike many marches and causes, that speak a big game, but aimed at law-abiding citizens, Baltimore Ceasefire is walking head up into the line of fire. They are starting a dialogue with anyone and everyone, from drug takers to drug dealers, in the most crime infested parts. When asked of their response – is when Erricka seems most hopeful, “They hope the ceasefire works, because they are tired of living the way they do.

When there is a void, crime fills the vacuum. And when the city is unprepared or overwhelmed, when death and misery become standard fair and when six murders take place in less than a 24 hour day, no reason to believe the vacuum affect will not swallow the ceasefire whole. But what if it works? What if a city where a murder occurs every 19 hours, gets a 72 hour reprieve because the residents asked?

Crime in Baltimore, Health Care in Appalachia, Climate Change in South Florida. What is the most pressing cause in your city and want are you doing to contribute to a solution?

4 Comments on “BALTIMORE’S 72 HOUR CEASEFIRE IS A HAIL MARY – BUT WHAT IF IT WORKS.”